My life is split into two realities. Before Code. And after him.

The first time I saw him, he walked into my father’s bank with the strut of a man who knows exactly what he wants. I saw in him a fearlessness that I desperately wanted, needed, craved as much as my next breath.

Because I was watching him, I knew immediately when he pulled out a gun, aimed it at the ceiling, and fired three shots.

And that is the way I mark my life—before that moment and after it. Before, when I tried to be agreeable, tried to be admired, tried to be pretty, tried to make sure everyone liked me. Tried to shake myself of shame. And after, when all of that fell away. When I just didn’t care anymore.

Before Code. And after him.

Afterwards, he would become my lover, my savior, my hope, and my strength.

But, before that, he was my hostage-taker. 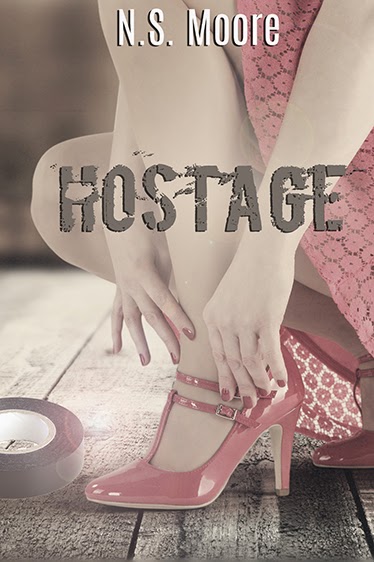 I wrench my arm away from the guy’s grip and try to run back toward my dad.

I actually get away from him. I think I must have surprised him, since he’s obviously a lot stronger than me. My whole body hurts, and my vision is still blurry, and I smell a burnt scent from the guns that’s so familiar and makes my stomach roll with nausea.

But I stumble away as fast as I can. I don’t make it very far when a strong arm wraps around my middle and pulls me back toward a lean, hard body.

I don’t want to be needed by a bank robber, even a sexy one with a tattoo and a five o’clock shadow. I’m used to going along with whatever people want, but there’s this surge of resistance that suddenly swells up inside me.

It explodes in one choked word. “No!” I struggle against his powerful grip, even though he’s a lot bigger and stronger than me. I don’t even think about that. I just need to get away.

“Damn it,” the guy mutters, dragging me with him toward the back offices again. “Stop your fucking wiggling.”

“Let…me…go!” I throw my elbow back, hoping to connect with something that will hurt him. Instead, I connect with the metal briefcase. The shock of pain is so intense
that I momently see white.

He takes advantage of my brief limpness by repositioning my body so I’m even more under his control. “Stay still,” he bites out, gruff authority in his tone, “or you’re going to get yourself killed.” He pushes me down a hallway, after the rest of the crew.

It’s an outrageous thing to say to me. “Fuck you, asshole! You’re the one who’s going to get me killed.”

His arm is now tucked under my tits, and it’s trapping both of my arms. I can’t swing out to hit him. And I don’t have the leverage to use my legs, since he’s half-carrying me as he strides through the hall. “I’m not going to kill you. I’m just borrowing you for a while. So shut the fuck up and do what you’re told.”

My mind is a whirl of terror, outrage, fury, and shock, and my body is completely out of my control.

This guy has control of it. Completely. He says he’s not going to kill me, but I have no reason to trust him.

He’s the one who is taking me hostage.

If it were me, I’d dump the hostage and then make a run for the Mexican border. But I figure maybe he thinks I’m the only leverage he has if he gets trapped.

Then he grabs me and pulls me to his side, keeping his arm around me. Maybe to someone else, it looks like we’re in a romantic clench, but his arm is so hard around my ribs that it almost hurts.

I know my own strength, and it’s nothing compared to how strong this guy is. There’s no way I’m going to be able to pull away from him.

“Walk,” he grits out, forcing both of us forward.


So we walk that way. Right along a pleasant, downtown street. Like we’re so in love we can barely keep our hands off each other.

Or like one of us has been taken hostage.

It’s all pretty surreal, when I think about it. Mostly, I’m too scared to do much thinking.

No one seems to be paying attention to us. I hear a lot of sirens, so I assume help has arrived at the bank. It would nice if help could arrive for me too.

We turn a corner, and I see a couple of uniformed police officers walking toward us. I can’t believe my luck. If I can get their attention, maybe they can shoot this guy and I can get free.

There’s not much I can do except say something, so I open my mouth to call for help.

I just start to make a sound when the guy pushes me back against an SUV parked on the curb and covers my mouth with his.

It hurts. He moves so abruptly and so roughly that it hurts when my shoulder blades hit the hard metal of the car. I can’t even breathe because his mouth is over mine. I can’t move because his lean, strong body is holding mine trapped.

My heart, my pulse, my vision is all pulsing with fear, surprise, and helplessness. My body is hot and cold at the same time. My arms are trapped between our bodies, but I can use my fingers and I claw at his shirt.

Then suddenly I can breathe. He’s torn our lips apart, although his face is still directly in front of mine and his body still pushing into mine. “Little bitch,” he mutters, his eyes flashing anger. “Don’t even think of doing something like that again.”

I open my mouth, and I’m not sure if it’s to scream or to snap back a reply. It doesn’t matter because his mouth has claimed mine again.

It’s not even really a kiss. It’s hard, punishing. And his hand slides down my bare thigh and pulls my leg up, like he’s really into the kiss. He’s mad at me, so I can’t imagine that he really is. He’s probably just putting on a show for the cops, who must be walking by us right about now.

I’m pretty well experienced with kisses, but this kiss isn’t anything like I’ve had before. My stepfather would kiss me when he came to my bed at night. They were
always light and gentle—some sort of brutal mockery of tenderness. Guys always kiss me before they fuck me—usually kind of sloppy and like they want to get them over with so they can get to the main course.

I’ve never been kissed hard and rough and punishing like this.

I don’t like it. At all. I hate this guy like nothing else for the way he’s treating me.

And I hate him even more because my body is reacting. 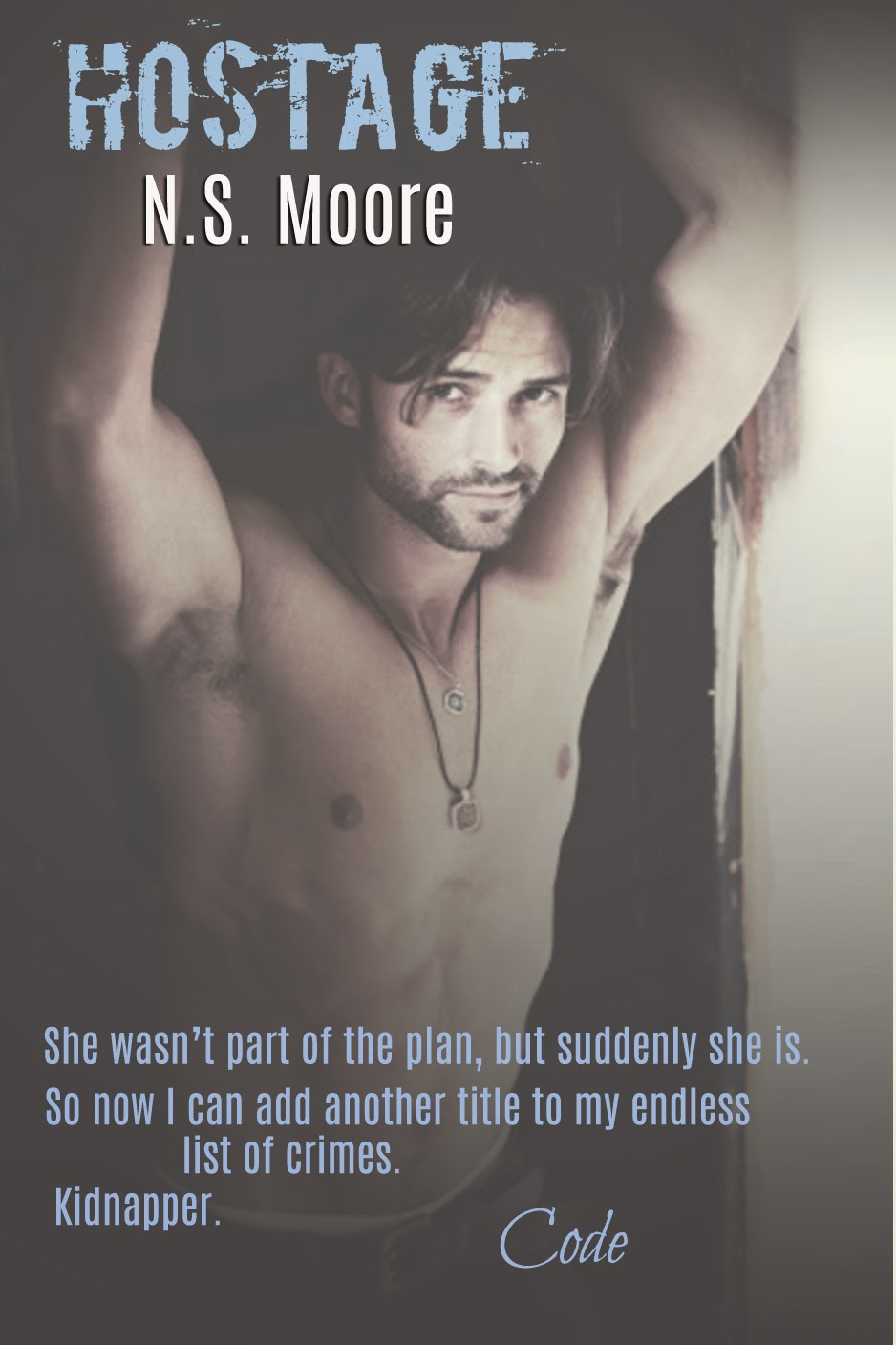 N.S. Moore has been writing for years, and she loves romance of all varieties—from sweet to very dark. Her first book, Hostage, is a sexy New Adult contemporary romance about two people who find each other in very unlikely circumstances but discover they’re exactly what the other needs.

When she’s not writing, N.S. Moore likes to read, shop, play tennis, and spend time with her family and her dog. She’s currently working on her next book.

She would love to hear from readers. If you’d like to get in touch with her, you can follow her on Facebook or email her at nsmooreauthor@gmail.com. 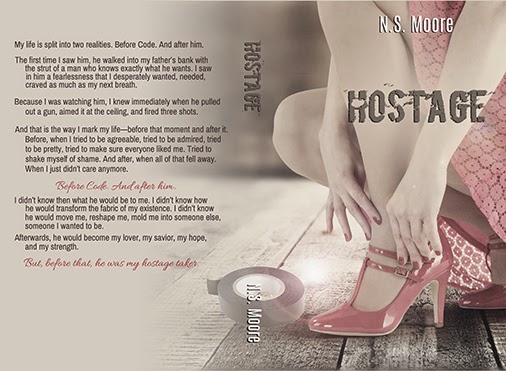