Synopsis:
The Perfect Boyfriend picks up right where we left Reagan and Ian in The Boyfriend List.

As their friendship blossoms quickly into a steamy romance, Reagan and Ian have to learn to navigate their shifting relationship…and everything that entails. But their newfound bliss doesn’t come without a few unexpected challenges.

In the midst of realizing just how sweet the romance can be between them, and all the benefits of their new dynamic, Reagan is informed that her ideal situation has changed. Not only will she need to begin taking on more classes to speed up her graduation date, but she’ll also have to start looking for a job to supplement her fading income. Meanwhile, Ian has chosen to pull out of school once his father is diagnosed with a terminal illness in order to help manage the family business and spend time with him while he still can. But he wrestles with the guilt of leaving Reagan behind, and the pressure of his new responsibilities.

As the two meet their new challenges head-on, they’ll be forced to discover whether or not they’re as compatible as lovers as they were as friends. With their focus pulled in so many directions, will they have what it takes to keep a long distance relationship alive? Can Ian prove that he’s still be the perfect boyfriend, or will they fold to statistics under the growing tensions of their lives? Throw in some manipulative exes, a new boss with an inflated ego, and a co-worker from hell and the two have a recipe for either a fairy tale ending, or a complete disaster.

The Perfect Boyfriend is a New Adult Romance about trust, love, and discovering the true depths of personal strength.

This was an adorable story of taking a friendship to the next level and all the trials that come along with relationships. It was easy to read and didn’t make you feel overwhelmed with too much drama. It had enough drama, humor, romance and friendship to keep the reader happy!

The friendship between Reagan and Petra was remarkable. It showed how true best friends should be. I loved when Petra would tell it like it is when Reagan would start questioning things. How she pushed her friend when it came to fashion and what to wear when she went on her first real date with Ian. I also loved how she kept an eye out for Reagan when she began to work in that club.

Ian and Reagan had an interesting relationship. It starts out with so much passion but he knew when it was too much for her and was ok with waiting. He had me swooning several times over how attentive and wonderful he was. I think he truly put Reagan first. She consumed him. But, as in all relationships there will be trials that the couple must get through. I am just thankful that Reagan wasn’t the overdramatic, pit of doom kind of girl and was able to handle things to an extent. Every once in a while she needed to be reminded but overall she handled everything very well.

It was an adorable story and I can’t wait to see what else this author has in store for us! 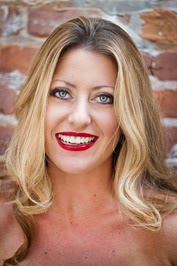 As a child, Novelle was already gaining recognition for several of her works, and in her formative years, she continued this trend by earning local awards for her short stories and poems.

Inspired to cultivate her talent, Novelle pursued freelance journalism and has found placement of 75 of her pieces in both online and print publications since 2008. Additionally, she has written multiple screenplays, and contributed her savvy, effective writing style to many non-profit and for profit organizations. She launched several blogs over the years, which garnered international attention.

In 2013, Novelle returned to her first love – fiction. She writes psychological and paranormal thrillers, as well as contemporary fiction and new adult fiction. For a complete schedule of upcoming releases, please visit www.RSNovelle.com