Being Kalli by Rebecca Berto 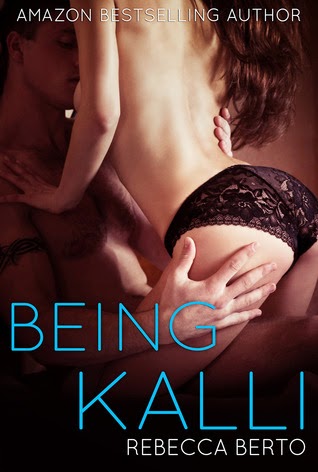 Synopsis:
Kalli Perkins makes it a habit of shutting her mouth, except to please a guy. She would say she goes off like a starved animal in bed, but Kalli doesn’t have sex in beds. She does it in hallways, in parks, in parties. She comes as a package deal.

One night at a party, Kalli makes a bet with her friend, Nate, that could change everything. But she didn’t count on him. Nate’s very capable of satisfying her, not only under her clothes, but in her heart, too.

She just doesn’t know it yet. 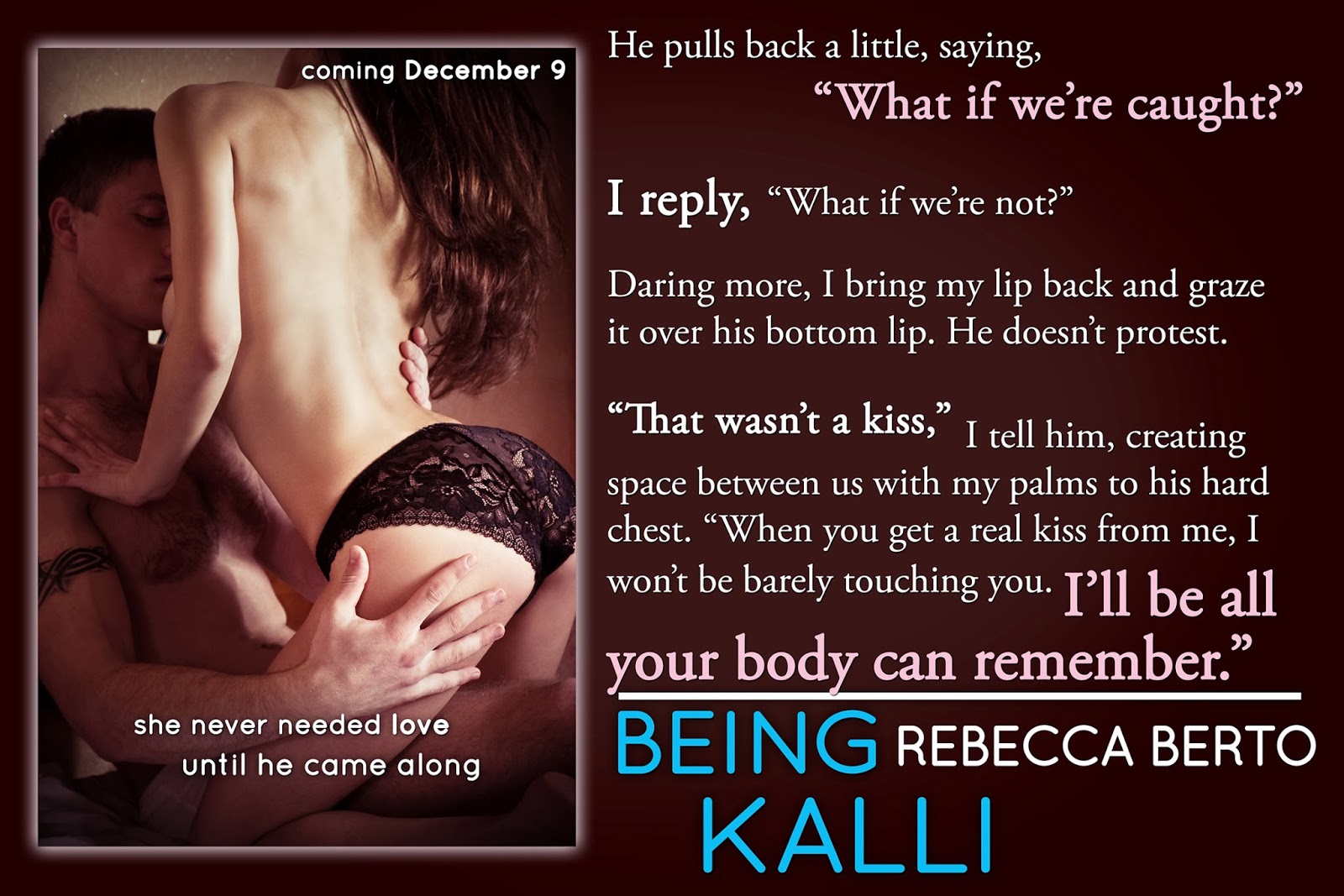 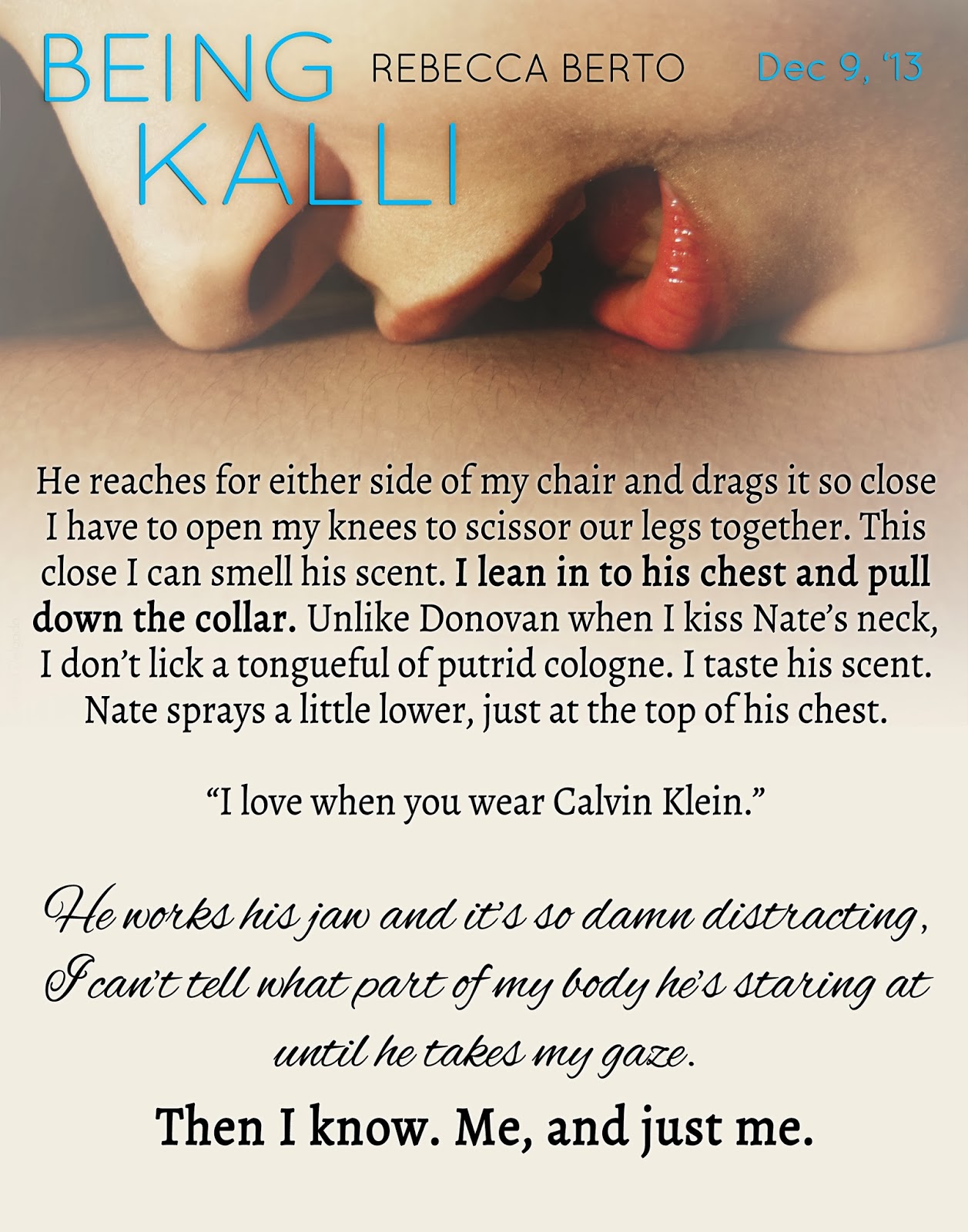 There are two things you should know about me:


One, I’m afraid of being alone with a guy.


Two, I’m certain I love my little brothers more than our mum does.


There are sweeping coloured lights patrolling the party, and a disco ball glittering over people swaying to the music, the pumping speakers, and the bar workers. It’s eleven on a Saturday and people are either drunk on alcohol or drunk from the wickedly mixed tracks, courtesy of the DJ. It’s a decent party, but it never matters. I’m with my pick for the night.


He’s hot, and I can appreciate a hot guy. Army buzz cut, almond coloured eyes, and arms that can sweep a girl clean off her feet and into his. Lucky for both of us, I don’t get swept off my feet by the likes of him—the type I hooked up with last weekend, or the one I made out with in the dorm hallway mid-week when all the normal people were sleeping. There’s something about my disinterest at impressing a guy that interests them.


But Donovan, he’s just like the rest. This one pulled my thighs onto his and I bent my knees back, settling onto his crotch, which grew a groan from him. When he starts talking too much I tell him I get called Kalli and not Kallisto. He starts layering me with kisses along my mouth and down my neck instead.


“That’s real good,” he mumbles, nibbling on me.


I don’t know if he means my name or the sweet spot at my neck because he’s been sucking my skin between his lips for these last five minutes on and off. And, yes, it’s been five minutes, because I’ve counted.


“But why ‘Kalli’?” Donovan asks when he parts with my skin for air.


“Because she was high at the time,” I answer.


Leaning in, I taste him back and suck on a spot. Unfortunately for me, Donovan has chosen to drown this part, just under the protrusion of his jaw, with a full bottle of aftershave, but I have too much pride and even more secrets to continue with the conversation. So I suck his skin in and around my tongue and fight the urge to pull away.


I’m not stupid; I hear the incredulous tone to his voice. Everyone has it. You expect trash when my usual dress code is, a) skirt or shorts at least three inches above my knee, and b) at least my cleavage, arms or the bony bits of my hips exposed. But even slummers have standards and people expect a mother to stay away from a glass of wine, let alone illicit drugs, when pregnant.


Mine thought naming me after astrology was awesome.


“Am I fine to continue sucking on your body, or do you want a history lesson?”


To explain what I mean, I lick a trail from a spot under his ear to the V of the neckline of his T-shirt. He understands, clearly. Or at least his dick does. It springs up against his jeans, which pushes at my inner thigh. I shift, so if his jeans and my G-string weren’t there, he’d be cradled between me.


Donovan doesn’t reply this time. He wraps his arms around me, dropping his hands to the small of my back. There, he reaches the tip of my long hair, and he tugs slightly. Soon, his hands dip inside the strap of my G and he groans when he realises how very small the material is.


We make out for another few minutes and this time I do lose count. I usually count when I kiss guys. Scout’s the only girl I’ve ever kissed, but it’s always for fun when we are holding hands and stumbling around parties drunk, looking out for each other the whole night. I don’t count with her. It never usually goes long enough.


My G is sliding between Donovan and I, and I have to wonder if my wetness is on his pants. Probably. I couldn’t care less. I’ve seen Donovan around campus and parties; we frequent the same circles, no doubt, but I’ve never spoken more than a handful of words with him before tonight. Probably won’t again.


It’s now, as I begin to get into this make-out session on our couch, that Donovan shatters everything and replaces my excitement with a pounding sense of dread, one I’ve always felt since I was a kid and a guy asked to be alone with me: sex or no sex involved.


He breathes into my lips between kisses, “Come back to my room.”


“I can’t.” I say it firmly, forcing us apart with my hands against his chest. I catch my breath before I bite my lip and lick it, ready to pounce on him again.


“Kalli, don’t worry.” He places a hand on my shoulder, which instead of the calming gesture he intended, sends me jerking back to my feet and fixing my mini skirt straight. “Kalli, really. I can sneak you in, no worries about anyone finding out, if you’re uptight about that.”


I sigh. He’s worried about me getting caught, worsening my reputation, possibly even jeopardising my university life. 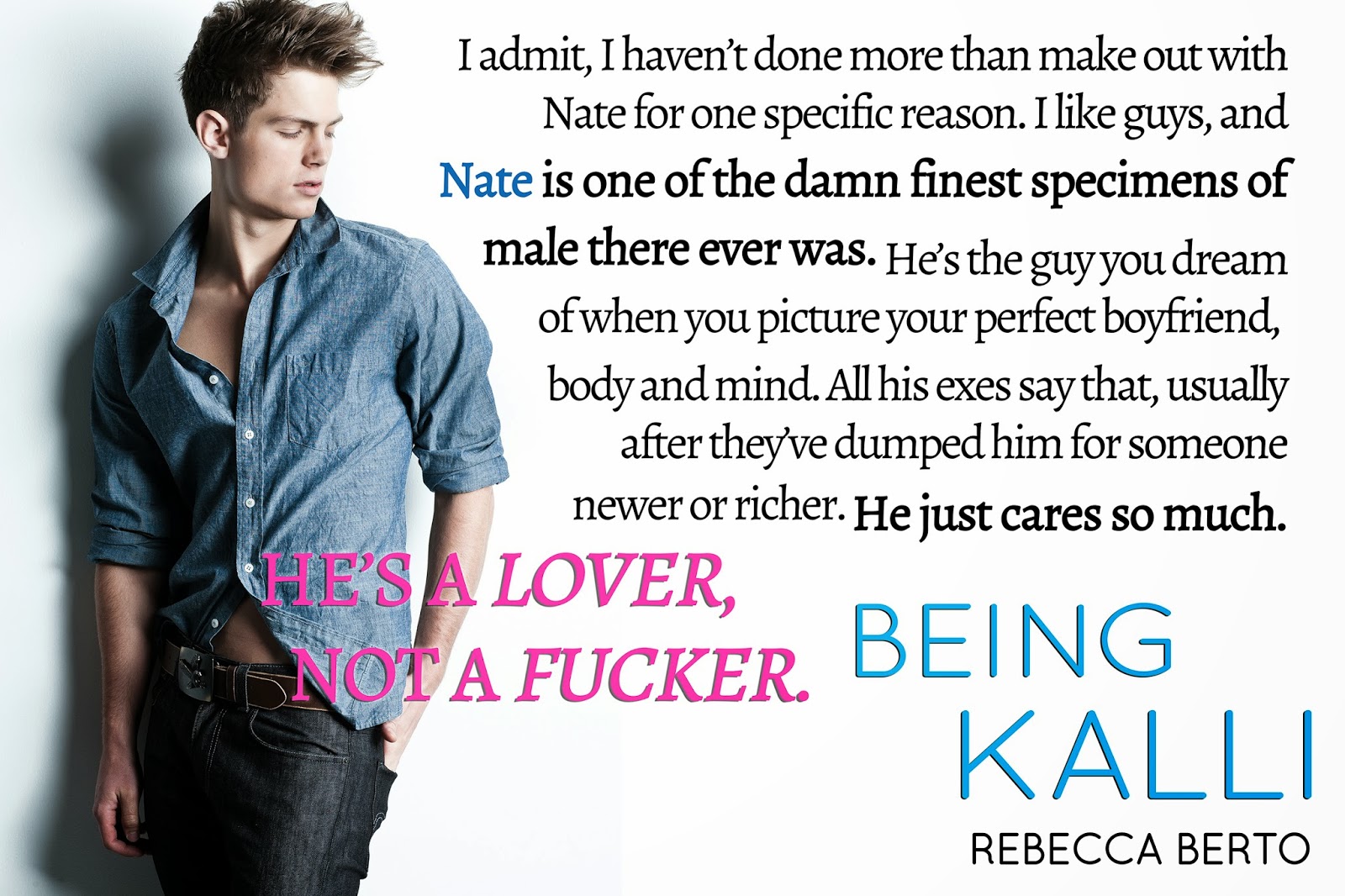 Rebecca Berto is the author or the dark contemporary/literary novella, PRECISE and the new adult contemporary romance novel, DROWNING IN YOU. She is also a freelance editor.

She writes stories that are a bit sexy, and straddle the line between Literary and Tear Your Heart Out. She gets a thrill when her readers are emotional reading her stories, and gets even more of a kick when they tell her so. She's strangely imaginative, spends too much time on her computer, and is certifiably crazy when she works on her fiction. 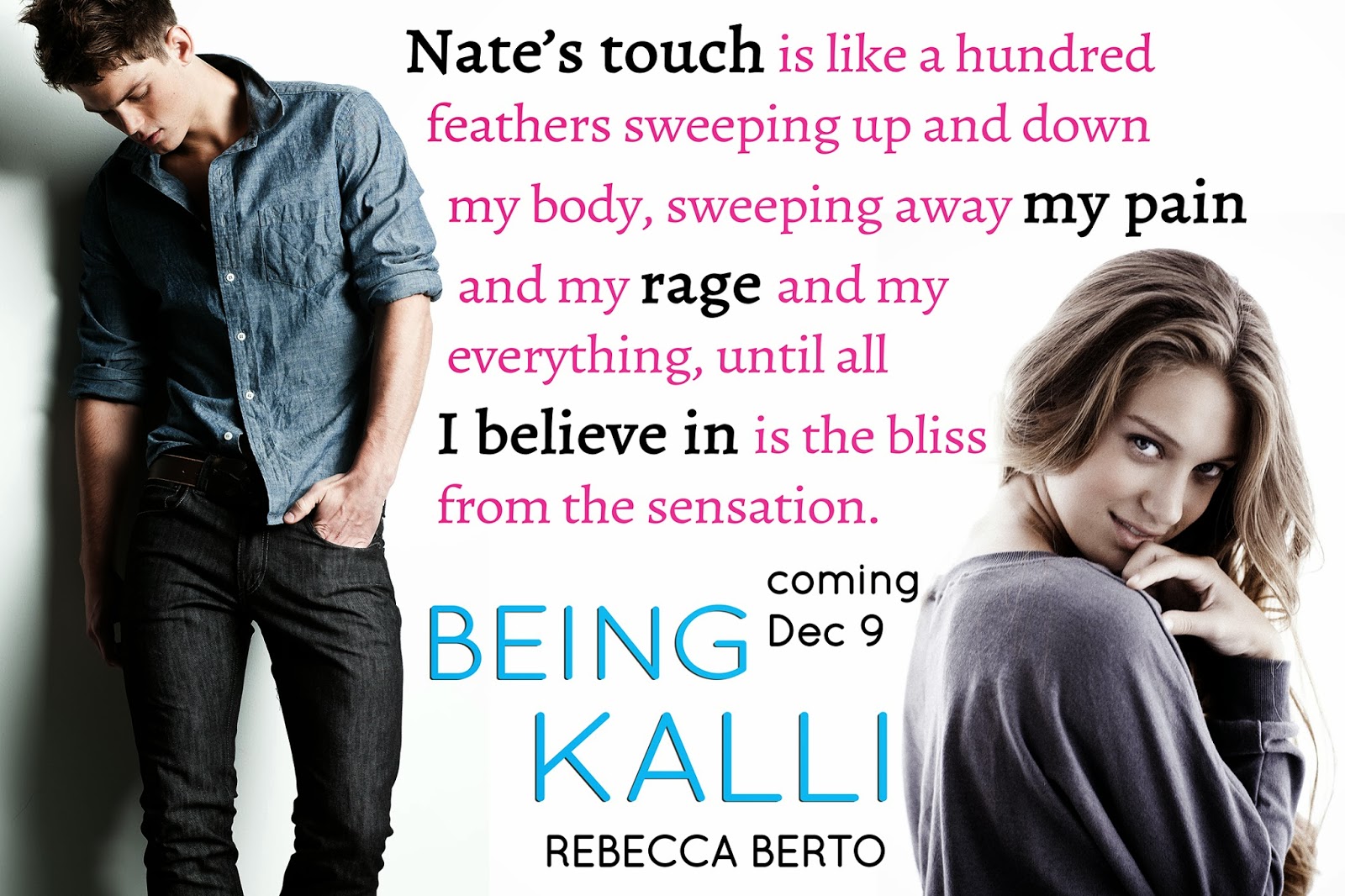