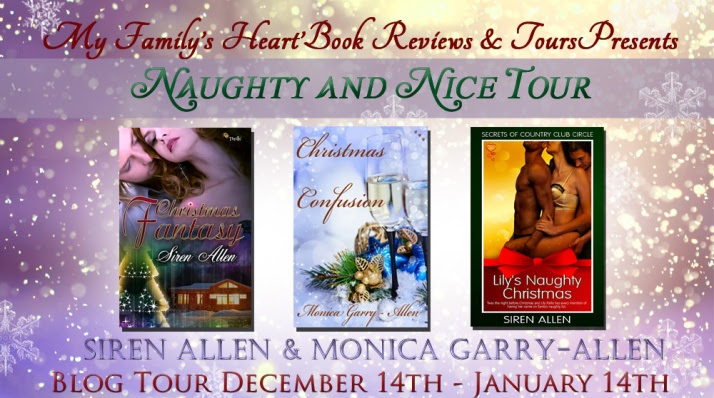 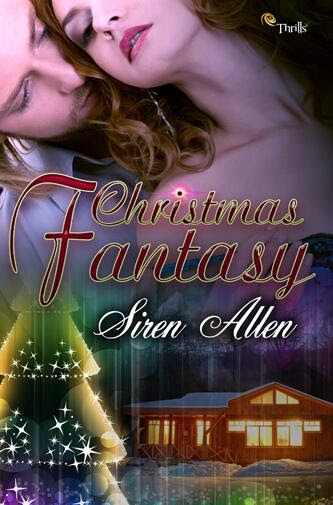 One bite was all it took.


It’s that time of year again. Alyssa Blakely is busy writing in her fantasy diary, filling it with all her forbidden, sexual fantasies. The star: her very sexy boss, Devin Jordan. Too bad for her, he’s never given her a second glance.

Or so she thought…

After a steamy kiss under the mistletoe and a night of wild sex, Alyssa has the bite to prove just how wrong she was.

Devin Jordan has found his mate. The only problem: she’s human. He’s not. Can he prove to her that his inner beast can be both naughty and nice? Or will her fear of the unknown keep him from claiming her? 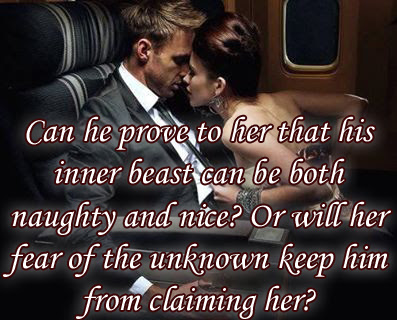 Devin took a deep, calming breath. Alyssa was off limits.
Even if she were single and interested in him, he still couldn’t have
her. It was too risky. She made him feel things he wasn’t used to. He
didn’t know if he could handle touching her without hurting her.

Hurting Alyssa was something he would never do. He would just have to
endure her presence. He would take pleasure in the shy smiles she cast
his way every now and again. He would enjoy the laughs they shared while
working late some evenings. He would maintain the professional
relationship they had, even though he yearned for a taste of her.

Devin turned and placed his back against the window. He stared at the
door that separated him from the woman he desired. A piece of metal and
space was all that separated his body from hers. It would only take a
couple of strides for him to reach the door.

One pull on the door knob and he could send it flying across the
room. Then he would be face to face with the one woman in this world
that made him wish he wasn’t a beast with a conscience. If he had no
conscience, he would take her, now, against his desk, against her desk,
against the wall, on every damn hard surface in this building.

He would make sure she enjoyed it. He would make sure he pleased her
so thoroughly that she wouldn’t even think of leaving him, even when she
found out that he was not the man he pretended to be. Devin sighed, but
that would never happen. Because though he was a beast, he did indeed
have a conscience

That conscience kept her safe from him… for now. 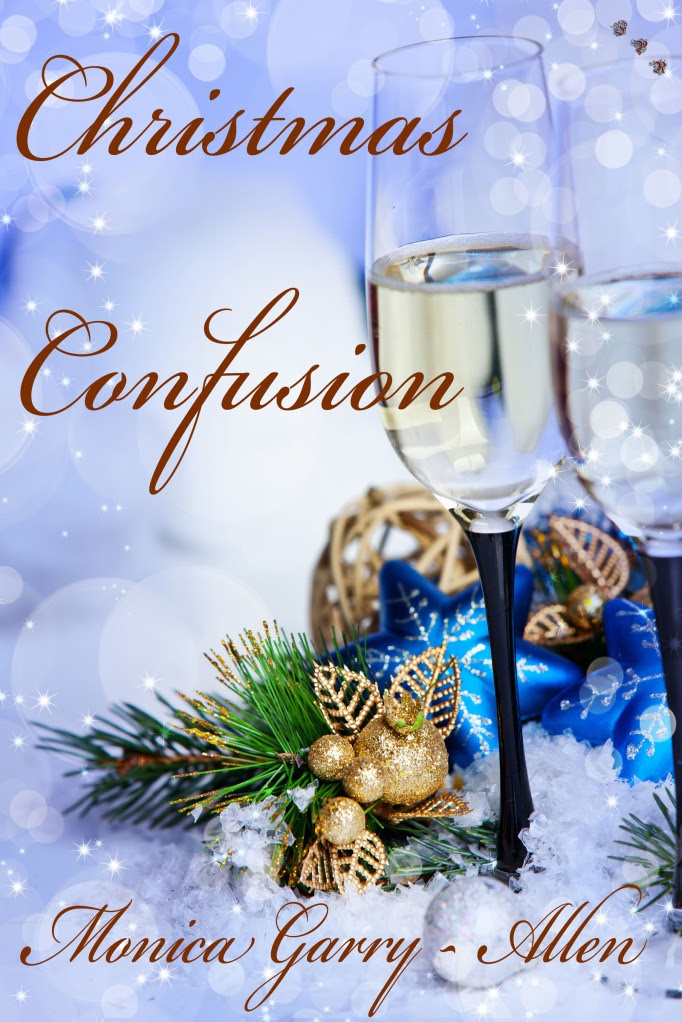 Can two people be any more confused than Bailey and Max?


Bailey Cooper is very much attracted to her neighbor Max Davis. Unfortunately for Bailey, Greg – Max’s lover is slowly becoming one of Bailey’s best friends. Bailey’s emotions are torn; she adores Greg’s friendship while at the same time she craves Max’s touch. What is a girl to do when she ‘thinks’ the man she's in love with is in love with someone else?

Max Davis and his baby brother Greg Davis are co-owners of the apartment building they live in. Max has fallen for his tenant, Bailey, but she avoids and ignores all of his advances. Max becomes suspicious of the friendship blooming between Greg and Bailey. He believes Bailey has a crush on his brother but Max wants Bailey all to himself. Now he has to think of ways to keep Bailey and Greg apart.

Will a holiday weekend full of chaos, confusion and a little bit of charm finally get Bailey and Max on the right track? Or will a few innocent caresses lead to more Christmas confusion? 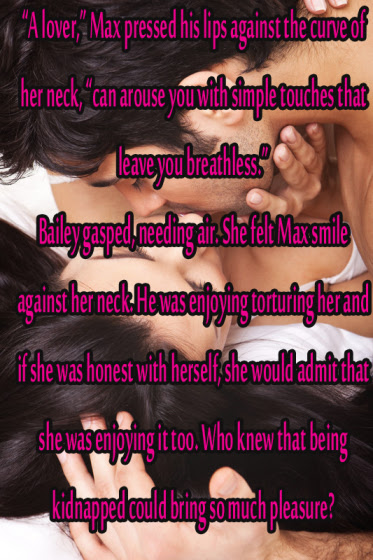 Max scooted back on the couch, he reached toward Bailey,
eyes straying to her legs. Even though she wore jeans, he still pictured her
legs bare, like they were when she jumped on his counter.

Max continued edging forward,
until his fingers wrapped around what he was reaching for. He picked the remote control up and
moved back to his side of the couch. His hand shook slightly. Bailey exhaled.
The sound sent chills over his body. Max pointed the remote at the television
and pressed play.

He cleared his throat. “Do you want to start from the
beginning or do you want me to find the last scene you watched?”

Max waited on her to answer but all he heard was the sound
of her breathing. He kept his eyes straight forward, fearing the sight of her
chest rising and falling would be his downfall. She took so long to answer that
he forgot what his question was.

“Whatever you want,” she whispered, and his gut clenched.
Max pressed pause.

Whatever you want would be the perfect answer to that question. But
none of those were the question she was answering. What had he asked her?

“Or we could just watch television,” she said. “We don’t
have to watch the movie, I know it’s a chick flick and you may not like it.”

Max cleared his throat again. He felt like his t-shirt was
getting tighter, choking him. Max found it hard to swallow. “We can just watch
it from the beginning. How long is this movie anyway?” he asked her.

“It’s a short movie, about an hour long.”

He would have an hour in her company, an hour with her
sitting within arms-reach of him, an hour of sweet torture and he would enjoy
every minute of it.

“Can I have a little cover?” he asked her.

“Sure, here.” Bailey leaned forward pushing some of the
comforter his way.

“Thanks,” Max told her, before draping the cover over his
legs and pressing play. The first scene of the movie came on. Bailey’s eyes
were glued to the television screen. Making good use of his peripheral vision,
Max watched her from the corner of his eyes.

He loved watching her smile at the funny scenes and tear up
at the sadder ones. Emotion after emotion flitted across her face as she
watched the movie. He wondered what kind of emotions he would draw from her if
she was underneath him. Would she be as passionate in the bedroom as she was
outside of it? Max had a feeling she would be. 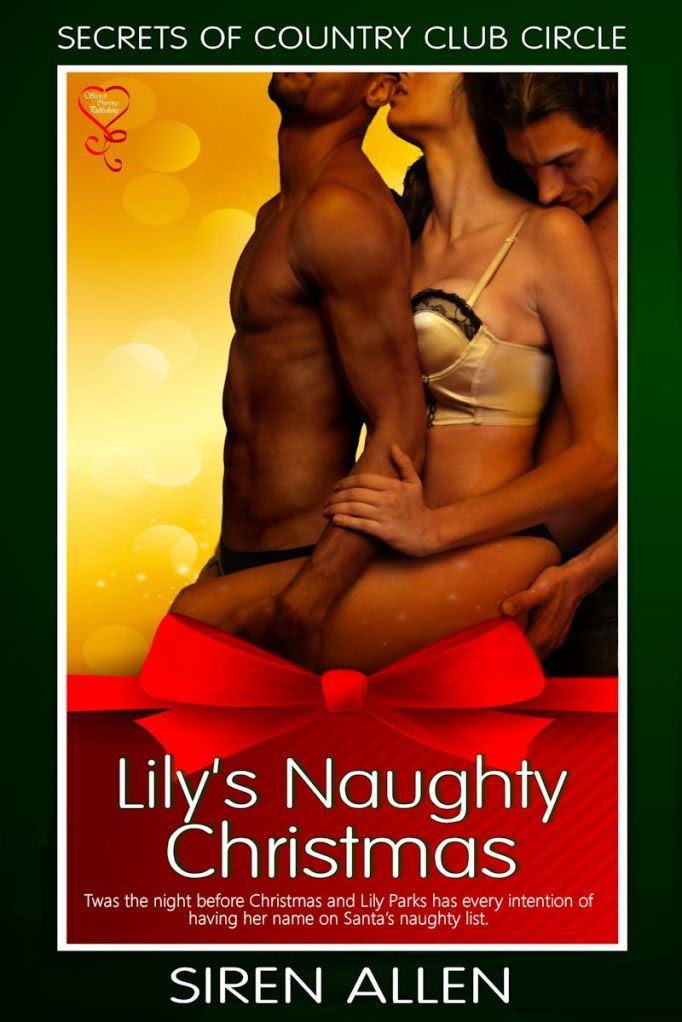 Twas the night before Christmas and Lily Parks has every intention of having her name on Santa’s naughty list.


Tired of her good girl image, Lily Parks is determined to let her wildest fantasies free, even if it is just for one night. She plans a night of seduction - the only thing missing is her ex-husband Charles and his lover, Paul. She wants them both and she knows just how to get them. 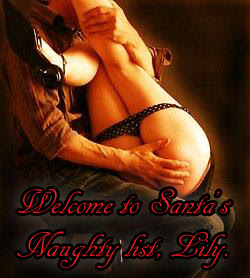 “Can you lock the door behind you?” she called to them over her shoulder. She heard the lock click. Time for the games to begin.

“Where are the other chairs?” Charles asked when he entered the kitchen.

“There are only three of us tonight, so we only need three chairs,”
Lily told him.

He raised his eyebrow but said nothing as he sat in the
chair across from her.

“Can you pour me a glass of champagne before you sit down, Paul?” Lily asked her ex-husband’s lover.

Paul was in the middle of sitting down beside Charles when Lily popped her question. He froze, looking from Charles to Lily.

Lily smiled. Charles was uncomfortable, she liked that. “If you want
something stronger I have vodka in the cabinet. You forgot to take it
with you when you left.”

Paul filled her glass with champagne then sat down. Charles stood up
and walked over to the cabinet, pulling a bottle of Grey Goose out. He
filled his wine glass with the clear liquid. Lily smiled as he drank it
down with one gulp then refilled the glass. At this rate he would be
drunk before they even began.

Lily stood up and walked over to the stove. “Let me serve you two.”

Behind her both men coughed, choking on their beverages. Lily took the lid off the pot containing the dressing.

“It smells good Lily, thanks for having us over.” Charles voice sounded a bit strained but not strained enough.

“You’re welcome.” Lily walked over to her ex and bent over him to
pick up his plate. Her breasts were right in his face, her ass right in
Paul’s face. She picked up the plate and took it to the counter and
began filling it with dressing, turkey, greens and candied yams.

She carried Charles his plate. “Enjoy,” she whispered before picking
up Paul’s plate and filling it. When she was done serving both men she
returned to her seat and began to drink from her glass.

“You’re not going to eat?” Charles asked around a mouthful of food.

Soon his mouth would be full of her. Lily shivered, and both men stopped eating. They stared at her.

“If I don’t watch this figure, no one will,” Lily told them. She took
another sip of her drink, enjoying the way she had them squirming in
their seats.

“You two should hurry up with your dinner, I have a present for the two of you in my bedroom.”

Lily stood up. She pushed her chair under the table and grabbed her glass.

“I’ll be waiting,” she whispered before she turned and sashayed away.
Her whole body trembled with nervousness. She’d done her part, she’d
put the offer on the table. It was now up to them to pick it up and run
with it.

Lily walked upstairs to her room. She sat her glass on her nightstand
and pulled her dress over her head. She had to wiggle a bit to get the
tight-fitting garment off. Lily put her dress back on a hanger and hung
it in the closet. She sat on her bed and resumed sipping her drink. All
she could do now was wait for them to join her.

Her weekends are spent writing and having sleep-over’s for her wonderful nieces and nephews. She loves to travel, preferably with her husband, so he can do all of the driving. She enjoys time with her family, who are just as silly as she is. She doesn’t have any children…yet! Her hobbies are reading, writing and shopping, though she hates trying on clothing. If she wasn’t a writer or a Laboratory Professional, she swears she would be a Secret Agent. But that’s the beauty of being a writer; you can create your own world and be whoever you want to be. In her imaginary world she is Queen and her siblings are her minions.

Monica Garry-Allen has loved reading for as long as she can remember. As a child her mother always purchased books for her at her school’s book fair. Back then her favorite book was The Little Mermaid. Now days she reads and tells stories to her nieces and nephews during her weekend sleepovers. Monica is a full time Clinical Laboratory Scientist. When she is not working in the lab she’s writing humorous love stories and steamy romances. She recently married the man of her dreams, Dempsey Allen, who motivates her to be the best writer she can be. She has a loving family who supports her one hundred percent and friends who can’t wait to read her next story. She resides in the southern part of Mississippi where she enjoys shopping, reading, writing and spending time with her family.

2- Ecopy of The Makeover by Monica Garry-Allen

6- Ecopy of Yours For Now by Siren Allen