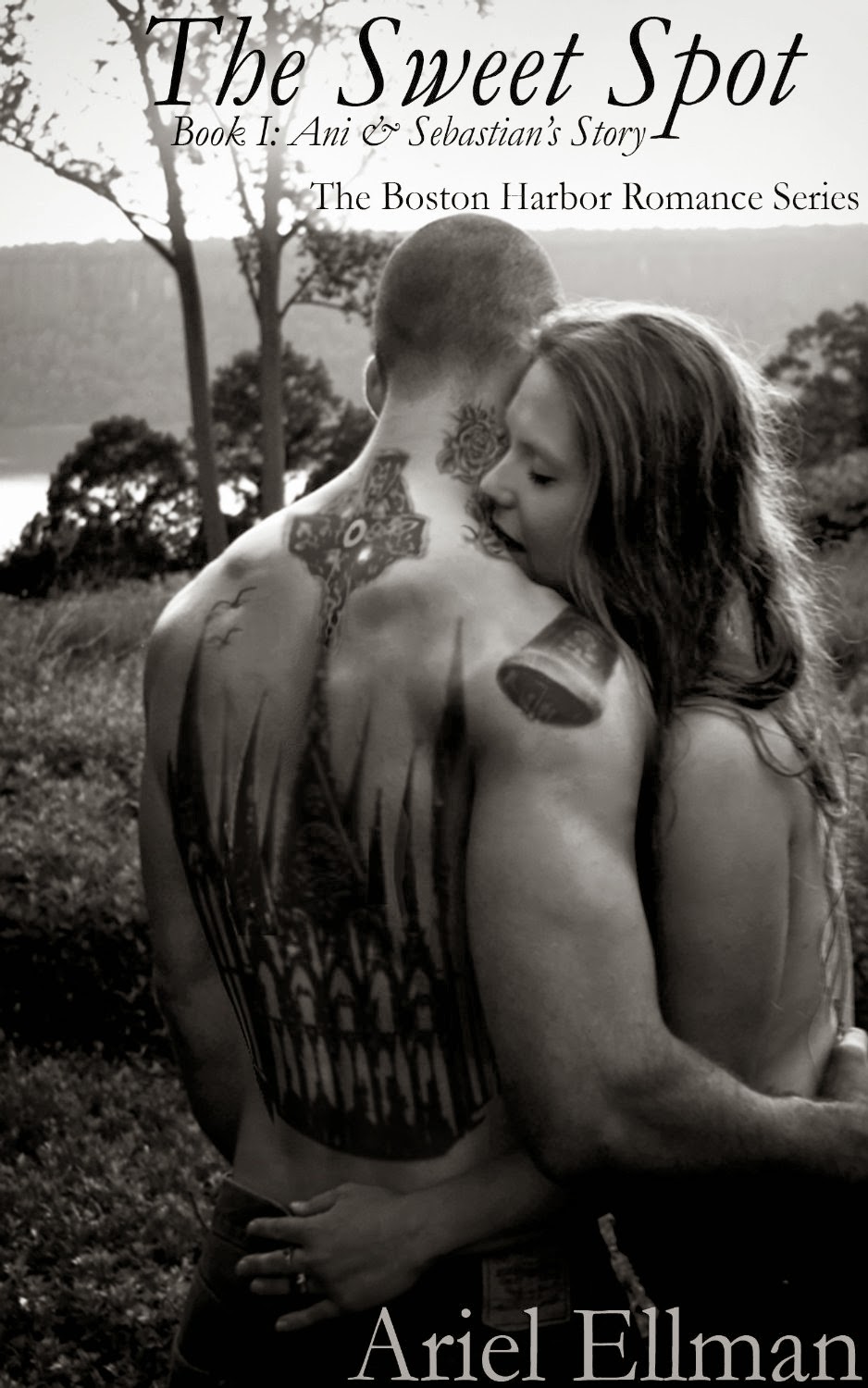 Ani Winthrop has spent the
last ten years trying to forget what it meant to be Ani Mackenzie, the girl who
had to say good-bye to her childhood love Sebastian O’Reilly when she was just
sixteen. She married a wonderful man, had a beautiful daughter with him, and
opened up her own bakery, The Sweet Spot. But when Sebastian walks into her
bakery after fifteen years apart, she cannot ignore that he is the only one who
could ever truly find her sweet spot.

Sebastian has returned to Boston now, no longer a boy, a man with a feral
intensity and a hard muscled body tattooed with the story of his years away
from Ani. He has returned to claim the love of his life, only to find that Ani
is a wife and mother to another man’s child.

Now Ani has to choose
between the love that she has for her husband Jordan, a handsome and successful
pediatric neurosurgeon, and the love for Sebastian that she has never been able
to let go of.

Sebastian’s
eyes darkened with desire at Ani’s teasing words and he pushed her plate away
from her and leaned in to capture her lips between his teeth.
“Hey,
I’m hungry,” Ani protested against Sebastian’s mouth with a laugh.
“I’ll
feed you,” Sebastian whispered, picking up a piece of dripping chicken with his
fingers and sliding it into Ani’s mouth. Ani sucked Sebastian’s finger into her
mouth and licked the dripping juices as he fed her.
“More,”
Ani whispered, twisting around and lifting herself up onto the table until she
was sitting in front of Sebastian with her legs in his lap.
Sebastian
dipped his fingers into the dish of chicken and rubbed the dripping sauce
across Ani’s bottom lip as he slipped his thumb under her teeth, rubbing the
taste of curry on the roof of her mouth.
“I’ll
never be able to taste curry again without thinking about you in my mouth,” Ani
moaned, throwing her head back as Sebastian continued to drip sauce onto her
lips.
“Still
want to eat?” Sebastian breathed, pushing the bowl aside and laying Ani down
onto the table.
“Yes.
You,” Ani moaned in reply, reaching for Sebastian and pulling him toward her.
“You
want to know what I dreamed of in prison when I had my hand wrapped around my
dick?” Sebastian whispered, unbuttoning his jeans and pulling Ani up toward
him.
“Yes,”
Ani breathed, reaching forward and pulling Sebastian out of his jeans.
“I
closed my eyes and imagined your hands on me instead of my own,” Sebastian
whispered, wrapping his hands around Ani’s as she stroked him. I imagined you
tasting me.” Sebastian rubbed his fingers across the tip of himself and wet
them with the beads of pre-come that oozed out. “I imagined this,” Sebastian
murmured, bringing his sticky fingers up to Ani’s mouth and rubbing them
against her lips.
“I
missed the taste of you,” Ani moaned, licking the salty residue on her lips and
bringing her face down to run her tongue across the tip of Sebastian’s leaking
cock.
“But
you know what I dreamed of the most?” Sebastian moaned as Ani took him in her
mouth.
“What?”
Ani breathed, lifting her head up to stare into Sebastian’s piercing eyes.
“Being
inside you,” Sebastian confessed, pushing Ani back down onto the table and
spreading her legs open as he peeled off her jeans. “I yearned to sink myself
inside you.” He slid a finger into Ani, stretching her open for him.
“Please,”
Ani begged, pulling Sebastian down on top of her.
“I
remember our first time like it was yesterday,” Sebastian murmured, sliding his
finger out of Ani and thrusting inside her with a groan. “You were so tight and
wet, so sweet.” He traced the hickeys down Ani’s body with his tongue.
“You
smelled like the sea,” Ani whispered back.
Author Bio
I got my first taste of
romance novels tucked away in the back of Papyrus, a little bookstore near
Columbia University in Manhattan, when I was eleven years old. They had a
children’s section, but it was downstairs in the basement, accessed by a
separate street entrance, and they always closed it before we got there.

My father liked to take me and my brothers to bookstores late at
night, after spending at least an hour lingering over black coffee and poppy
seed cookies at The Hungarian Pastry Shop on Amsterdam Avenue and we never made
it over to Papyrus before ten p.m.

Out of boredom, trapped in the dusty aisles of Papyrus late at
night, I started browsing through all the old used books. I wasn’t too
interested in the textbook sections that catered to the Columbia students, but
I did fall in love with the paperback romance novels. The first one that I read
was an epic 500-page historical love story set during the War of 1812. I was
drawn in instantly, and I fell in love with romance novels after that. My
oldest and dearest friend Barbara’s older sister, Audrey, lent me my second
romance novel, a tattered paperback that reminded me of a steamier version of
the movie Romancing the Stone with Michael Douglas and Kathleen Turner. After
that, I could always be found in the romance section of B. Dalton Books,
devouring steamy historical romance novels by Catherine Coulter and Dorothy
Garlock.

I then proceeded to write my own romance series, which I thought
was fabulous, but since I was only twelve and had an almost non-existent love
life to base it on, it probably wasn’t actually that exciting.

Over the years, I detoured away from the standard romance novels
as I delved into classic literature as an English major in college at Drew
University, and I fell in love with the classics: Jane Austin, George Elliot,
The Bronte Sisters, Hardy, and Hawthorne. In my personal reading, I delved into
Gail Tsukiyama, Dorothy Allison, Kathryn Harrison, Julia Alvarez, Anita Shreve
and many others. I devoured memoirs by Alexandra Fuller, Adeline Yen Mah and
Helen Fremont. I went through a Patricia Cornwell phase and even considered
becoming a mortician, earning the nickname Morticia from my husband’s high
school buddy Jeremy. But through it all, the constant theme that attracted me
to everything that I read was romance, and in the end, I found myself circling
back and falling in love with the good old romance novel again.

Upon my return to my old love, the romance novel, I fell in love
with Julie Garwood and read every historical romance that she wrote at least
five times. Then I discovered Diana Gabaldon’s Outlander books and tore through
them, sulking and grumbling as I waited for each new book in the series to come
out.

During this process of abandoning the romance novel and finally
returning to it, I graduated college, married a wonderful man and spent the
next twelve years having five children, which kept me a little busy and
distracted me from the one thing that I love more than reading romance novels,
writing them.

So armed with a little more history in the love department than I
had at twelve, I decided to dive back in and write The Sweet Spot. I had no
idea initially that it was going to be the first book in my Boston Harbor
Romance series, but as I was writing it, I realized that I didn’t want the
story to end, and that so many of the characters in the book had stories that
needed to be told.

Whenever I finish reading a great romance, it is always
bittersweet because I miss the characters that I have fallen in love with. The
wonderful thing about a series is that you never have to say good-bye.
Author Social Media Links:
Goodreads Book II: http://www.goodreads.com/book/show/18712139-mixing-it-up
Goodreads Book I: http://www.goodreads.com/book/show/18296522-the-sweet-spot

What is your writing inspiration?:
Everything around me inspires my work. Sometimes something
simple will spark an idea, like the feel of a raindrop on my cheek, and
sometimes my inspiration will come from something deeper, a feeling that a
friend or loved one evokes in me.

What would you die without?:
My AMAZING support network of friends and family

What is your favorite guilty pleasure?:
Definitely reading romance books! And drinking my coffee with
heavy cream ;).

Did any of your early ideas or characters make it into your
current work?:
Yes and no. All of the characters in The Sweet Spot were
original to the book, but the idea of Ani and Sebastian’s story came from a
fictionalized memoir that I was working on before it. Everyone that read my
memoir kept fixating on the story of my first love from my teenage years, and
the unresolved way that we left each other. The interest that everyone showed
in that aspect of my original story sparked the idea of Ani and Sebastian’s
love story in The Sweet Spot.

Do any of your friends or family inspire the characters in the
book?:
Yes! My relationship with my little sister definitely inspired
the relationship between Ani and Sawyer in The Sweet Spot and the entire
series. My sister and I cannot be around each other without doubling over in
hysterics every five minutes. We laugh non -stop when we’re together, we both
have foul mouths and a playful sense of humor, and we know each other inside
and out. We mother each other to death, and we know that we can always count on
each other no matter what. There is nothing like a sister to get you through
all your good times and bad, and Ani and Sawyer’s relationship reflects that
throughout the entire series.

Do you have any new projects in the work for another book?:
Yes! I am currently writing Book IV in my Boston Harbor Romance
Series, which is about Bella, Bobby’s little sister, who you meet briefly in
Book II. I’m really in love with this story, partly because I feel like I have
a little more freedom and flexibility with this book than I had with Book II, Mixing
It Up, and Book III, Mississippi Spice, which will be released next month. In
books II and III, the characters had already been established from The Sweet
Spot, and while I loved telling both Sawyer and Jordan’s stories, I didn’t have
as much room to play with them as I do with Bella, because I’d already given my
readers certain expectations of Sawyer’s and Jordan’s personalities. With Bella
and book IV in general, I feel like I have a blank canvas again, the way that I
did with The Sweet Spot when I started the series, and it’s a lot of fun. I
love that I can continue to develop all of the existing characters in the
series, especially Raffi, who is slowly becoming a teenager and approaching her
own story, and yet, I’m also creating something fresh and new at the same time
with Bella’s story.

Do you let your close friends and family read your work while
you are writing it?:
Initially I did, and The Sweet Spot went under the microscope
with my friends quite a bit through all of it’s stages, but as I’ve progressed
through the series, I’ve become a little more hesitant about letting anyone
read anything until the first draft is at least complete. While I definitely
think it’s valuable to get input from “test” readers, I also think it can
sometimes be distracting when you’re still trying to figure out the exact
direction that you are heading with the story yourself.