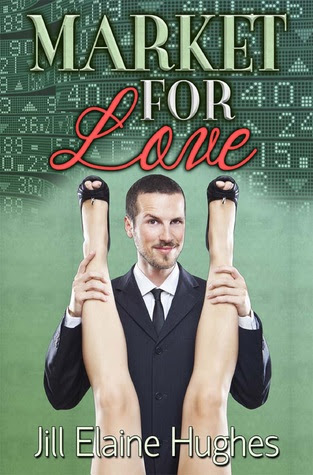 Heroine Miranda Johansson has had a very bad day.  The strait-laced, ultraconservative
stock-market analyst in Chicago’s LaSalle Street financial district just lost
eighty-seven million dollars of her clients’ money in a massive stock-market
implosion.  And if that weren’t bad
enough, she just had wild, no-holds-barred sex with a complete stranger on her
coffee break----and that complete stranger turns out to be her new boss!  Can Miranda get control of herself without
losing her job, and her mind?  Or will
her sexy new boss completely derail her self-discipline, her stock portfolio, and her career?  (Not to mention the sudden intrusion of his
manipulative ex-girlfriend---a scheming, ruthless woman who controls half of
Wall Street.)

Will Miranda survive the ups and downs of her new love life,
which is just as volatile and unpredictable as the market?  Or will her new romance go down the tubes
along with the economy?  Only time will
tell.

Readers who are down and out about their trashed
investment portfolios can pick up a copy of MARKET FOR LOVE and forget all
about the economic downturn.  Read the
book, and have a little fun peeking inside the unseen world of the sexy young
investment bankers who’ve been pushed to the edge along with everyone else.

Playlist for MARKET FOR LOVE:


“Three double-espressos, please,” Miranda barked at the purple-dreadlocked college student behind the counter of her building’s lobby coffee shop. “With soy milk and a dash of hazelnut syrup. And can you put all three double-espressos in the same big cup, please? Just leave off the lid. I’ll drink it here.”
The purple-dreadlocked clerk didn’t acknowledge Miranda’s order. He just stared at her.
Miranda rolled her eyes. She didn’t have time for this. “Pardon me, but are you hard of hearing?”
“No,” the glassy-eyed, purple-haired clerk said after a long, awkward moment. “Sorry. I was just kind of freaked out by your--face, that’s all.”
“My face? Are you implying there’s something wrong with my face?” Miranda’s temper—short in even the best of circumstances—let loose in full post-market-crash fury. “Because if you are honestly going to stand there making comments about my face when your hair looks like something out of a Dr. Seuss book, then you have really got a lot of nerve, buddy.”
Purple Dread Head’s mouth popped open for a moment, then clapped shut with a click. Silently he turned his back on Miranda and began frothing some milk for her espresso order.
“That’s more like it,” she said under her breath. “Lazy freaking hippie.”
Tossing petty insults at low-paid service workers wasn’t exactly Miranda’s style----in fact, she’d put herself through business school slinging lattes at this coffee chain’s main competition----but losing eighty-seven million dollars’ worth of her clients’ money in one day wasn’t exactly her style, either. With that kind of bad news weighing her down, Miranda figured she was entitled to blow her stack a little bit. She stepped down to the end of the counter to await her order, seething, and grinding her teeth in time to the espresso machine.
As she stood there, gathering up about nineteen packets of sugar for what would probably be the most intense shot of caffeine in her life, Miranda felt a sharp tap on her shoulder.
“I really think you owe the Rastafarian behind the counter an apology, miss.”
Miranda whirled around. A tall man stood just to her left, carrying an extra-large mug of hot chocolate complete with about four inches worth of whipped cream on top. A tall, slim, trim, well-dressed, and very attractive man. Dark hair in an immaculate, well-combed cut. Ice-blue eyes. Jawline so angular and sharp it was probably capable of shredding lettuce. Broad shoulders, square chest, dimpled chin. A stop-your-heart-right-between-beats kind of tall, attractive man. In other words ….
Drop. Dead. Gorgeous.
A drop-dead-gorgeous man who also looked about two seconds shy of tossing his hot chocolate right into Miranda’s face.

The story begins with Miranda who is having an awful day at work. She is a senior executive analyst at Maxwell Moore & Company. She has lost 87 million dollars for her clients and is completely devastated. She decides to go down to the buildings coffee shop and get three double espressos to help her cope with such a monumental loss. While there she meets an absolutely gorgeous stranger. One thing leads to the next and they are getting it on in a private office suite. Miranda doesn’t even know the stranger’s name which is so out of character for her.
Turns out after her rendezvous with ‘Max’ (she found out his name after they finished) is actually a rendezvous with the new CEO of the company she works for…. Talk about embarrassing. I can’t even imagine having the type of morning that Miranda had… I would probably have to crawl under a rock and die. Max always gets what he wants though and right now his eyes are set on Miranda. Miranda is stubborn though and won’t let Max control her as he is used to doing.

Max and Miranda start off very steamy but after a law suit appears from Max’s ex and Miranda’s arch nemesis things get a little rocky. Victoria is out for vengeance and has been for years.

The journey that Max and Miranda is full of suspense wondering what will happen and what secrets are waiting to be revealed. Max’s number one priority is to protect Miranda because he loves her. Miranda loves Max too but can their relationship overcome the obstacle that Victoria has now thrown in their path?!?!?!

The story was a great and quick read that kept you intrigued until the very end. I loved the epilogue and was glad to see the way the story played out. This story is like Cinderella but for an everyday Business Woman.