.99 Sale on The Ballad and Intermission by Ashley Pullo 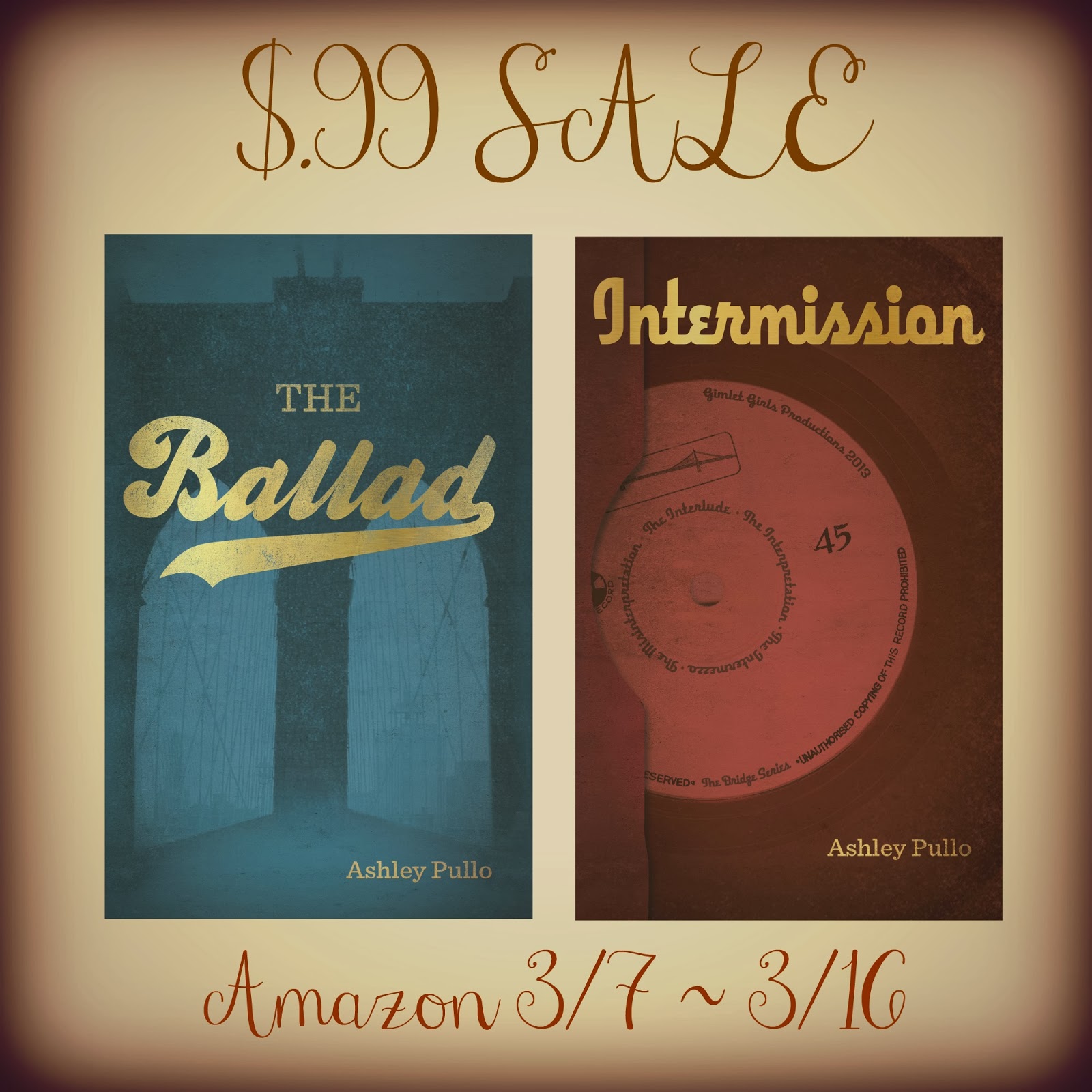 The Ballad is a Contemporary Romance designed to involve the reader in the authenticity of life, love, and all things in between. Does love follow a formula?Ever since Alanis Morissette’s awkward days on Nickelodeon, Canadian Chloe LeGrange has dreamt of the rock star life in New York City. She’s impulsive and honest, making for a confident musician—but her emotions are in constant need of balance. When Chloe settles into her city life during the summer of '03, she reluctantly offers to go on a blind date.Enter fate—stepping in and disrupting the storyline. A flicker of light, an instant attraction, an undeniable connection—Adam Ford’s perceptive narrative launches their story.But what if the ballad of Adam and Chloe starts with the end? The chorus before the verse…

Intermission: Three novelettes and one bonus short story from cast of The Bridge Series.
THE INTERLUDE~“Love does not consist of gazing at each other, but in looking outward in the same direction.” ― Antoine de Saint-Exupéry When the snarky Natalie LeGrange meets a handsome stranger on a train to New York City, her immature philosophy on life is suddenly challenged. A casual relationship quickly evolves into a beautiful friendship, but the ultimate sacrifice must be made in order for the other to follow the stars and dream. THE INTERPRETATION ~ "Evian is naïve backwards." --Reality Bites Chloe LeGrange lives impulsively in the moment... but what if she receives a glimpse into her future? Join the dynamic heroine of The Ballad as she struggles with her present, yearns for the simplicity of her past and anticipates the inception of her future. THE INTERMEZZO~ "Je ne regrette rien." --Edith Piaf When Zach Parker returns to NYC on leave from Afghanistan, he only wants two things: Natalie LeGrange and Virgil's barbecue. Continuing the heartwarming story of The Interlude, Zach and Natalie prove that love is selfless and timeless. Set against the charming backdrop of a Manhattan Christmas, Zach and Natalie will once again capture the essence of love, laughter and the power to dream. THE MISINTERPRETATION~ When eighteen-year-old Adam Ford crashes a party in Toronto, a brief encounter with a beautiful girl interrupts his superior perception. Being wrong has never felt so right...

Their paths have crossed, setting the refrain in motion.

Ever since flannel and Doc Martens were considered edgy fashion, Canadian cousins Natalie and Chloe have dreamt of a life in New York City. But now that they’ve finally scored a Manhattan zip code, their teenaged fantasies are overshadowed by an adult reality. With Natalie struggling to accept a long-distance relationship—and her constant battle with loneliness, her survival depends on Zach’s safe return. And with Chloe’s endless need to find balance and purpose—and her embarrassing secret holding her back, can Adam Ford be the one to understand her completely? Change is inevitable and fate is insisting. And when panic follows crisis and love is questioned, stories can change in unexpected ways. The narrative becomes the verse, the part to the whole—the story within the story.
Posted by Unknown at 5:04 AM