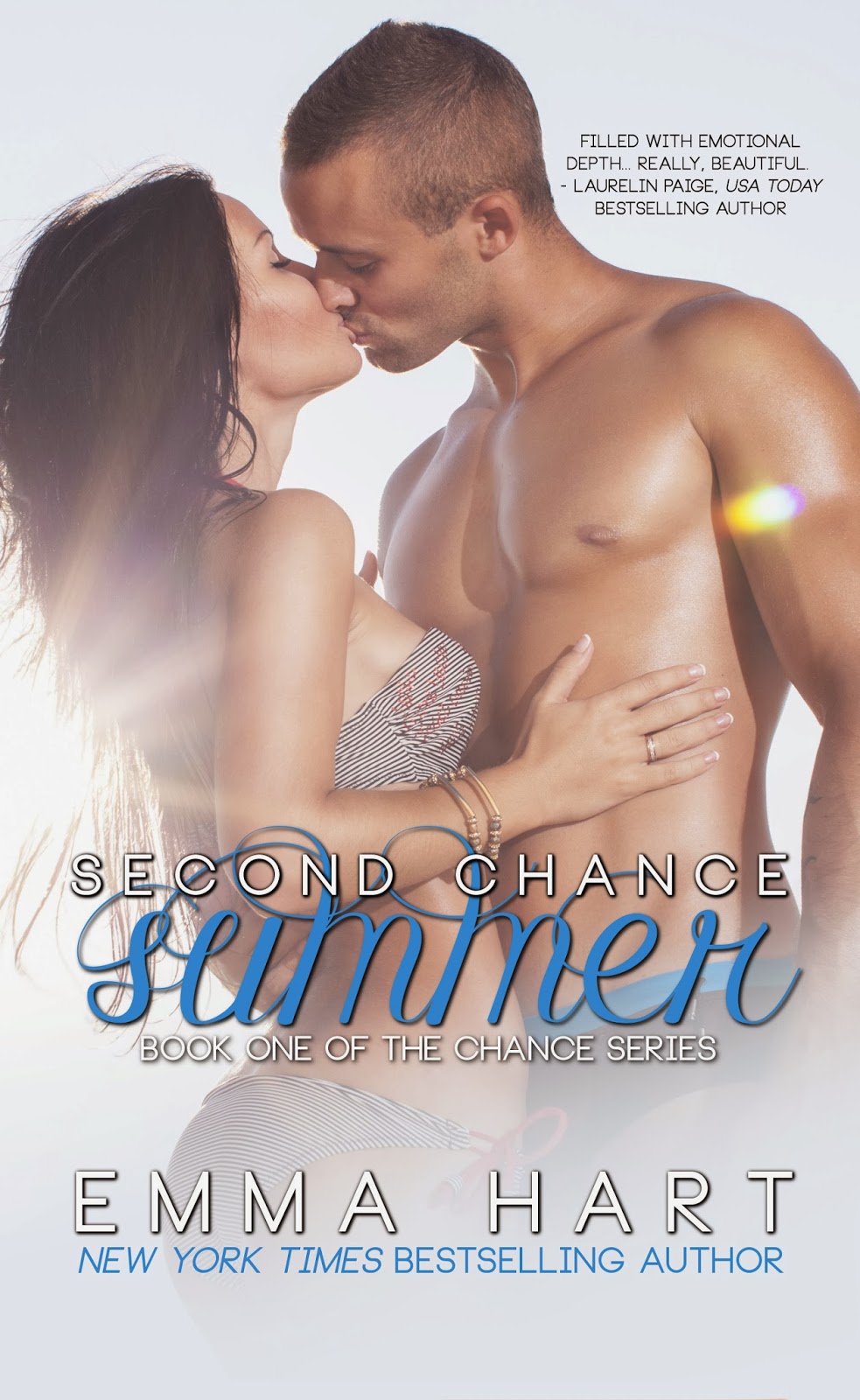 From the New York Times and USA Today bestselling author of The Love Game and Playing for Keeps is a story of hope and the beauty of getting a second chance at the kind of love that comes once in a lifetime…
“You don’t get a love like ours and get to leave it behind.”
Kia James was never meant to return to her hometown of Harlan Grove, Alabama… But she has.
And Reese Pembleton was definitely not supposed to still be in love with her the way she is him… But he is.
Last summer was the summer to end all summers. It was the summer they both fell in too deep to get out, and try as she might, Kia can’t deny that whatever was there between them a year ago is still there. If she’s honest with herself, there’s so much more there than there ever was, but the way her dad walked out six years ago has shattered her belief of that fairytale love every girl craves.
Reese isn’t giving up so easily. His biggest mistake was not chasing after Kia the way he wanted to when she upped and left him without a word. Despite what she says, he knows her better than anyone, and he knows she still wants him the way he wants her. And this time, nothing will stop him from getting – and keeping – his girl.
But nothing is that easy. When Kia’s dad arrives back in town, family secrets come tumbling out she never realized existed. Everything her mom has ever told her about the reason he left is a lie – but how can she trust the man who, by his own admission, didn’t fight for her as hard as he could have?
With her past and present wants and needs colliding, Kia is thrown into the turmoil of the biggest decisions of her life. And she realizes, sometimes a second chance is all you need. 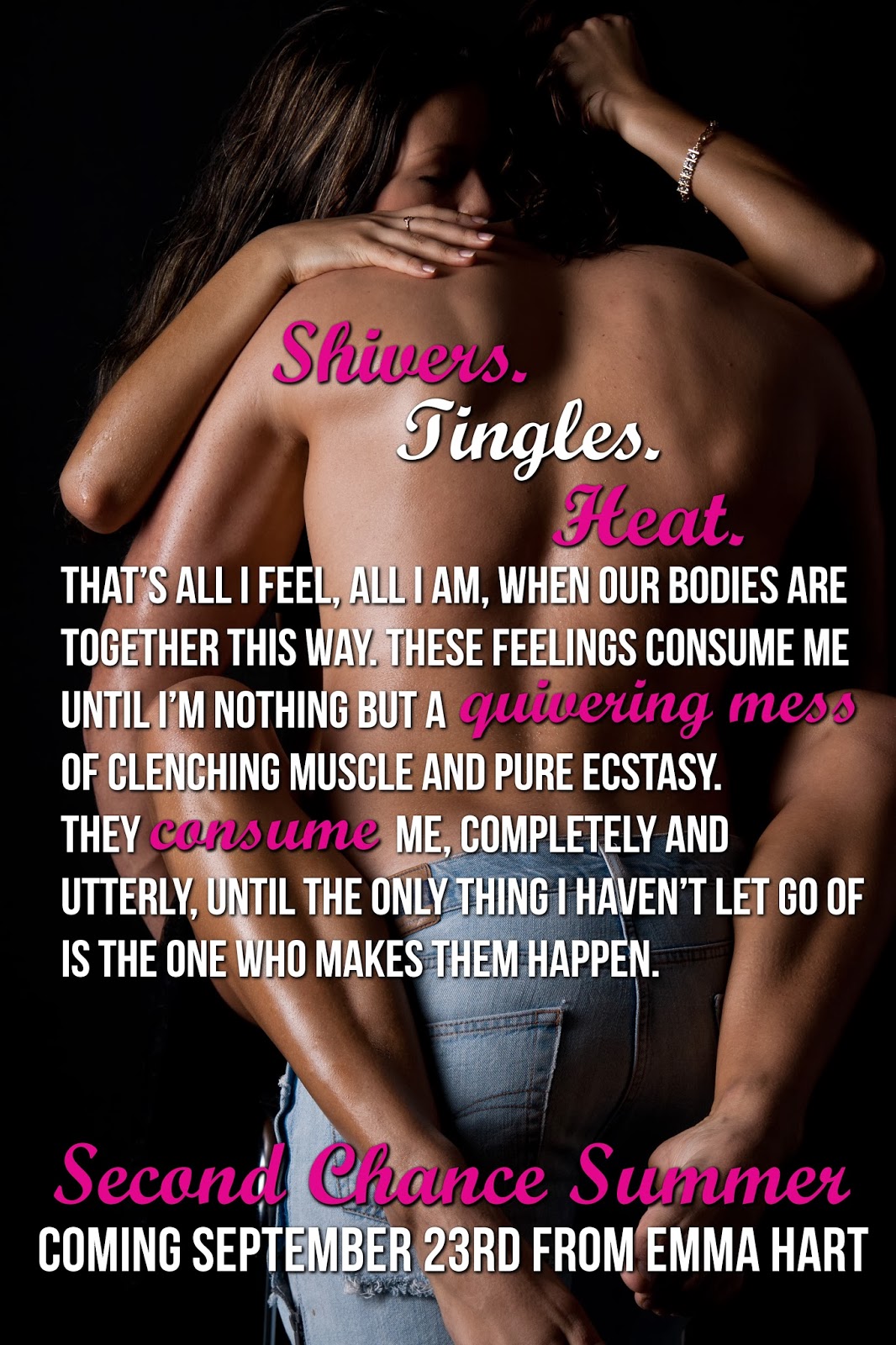 “Shit! Kia!” Reese calls after me. “I didn’t mean it like that!”
I ignore him and keep walking. Step, step, step. Keep going, Kia, don’t stop for him. His hand grabs my arm, and I turn, yanking my arm back as I near where his truck is parked.
“What, Reese? You’ve made it clear last summer was a mistake. You’re right. It was. It was just a whirlwind mess between two people who had no idea what they wanted from life.”
“I didn’t mean it like it came out. I just meant I didn’t want you to hate this place because of me.”
“I don’t hate it because of you.” I look at him and laugh bitterly. Shadows play across his face in the darkness. “I hate this place because of what it means to me.”
“What does it mean, Kia? Tell me.” He loosens his grip on my arm; his thumb gently stroking my skin.
“It means nothing,” I say quietly, stepping back. “Nothing.”
“You’re lying,” Reese steps closer and holds my other arm. “If it meant nothin’, you wouldn’t be running from me.”
“I’m not running from you! Why would I be? One summer, that’s all we had.”
“Is it?” he asks quietly. “One summer? Is that really all we had? Do you think my feelings disappeared the way you did? Do you think they upped and went in the middle of the night just like you?”
“I never said that-”
“‘Cause they damn well didn’t!”
“Rumor has it you’re seein’ someone, or have you forgotten that?” I throw back at him.
“Maybe I don’t care about her. The person I care about is front of me.”
“After eleven months? Why don’t I believe you?”
“Let me show you. Make you believe me.”
I shake my head. “You’re so fucking funny.” I pull myself from his grip and move toward my car, passing his truck.
“Am I?” he growls, grabbing my hand and pulling me toward him. My back hits the door of his truck, and he stops in front of me. He places his hands either side of my head, his face bent into mine. “Am I funny, Kia? Really?”
My heart is pounding furiously at his nearness, and I push at his arm. My blood is thundering through my body, my breathing coming hard and fast. I can feel the warmth emanating from his body. I want more. I need more. I want to feel his body pressed against mine, even if it’s just for a second. I need to feel it.
His hazel eyes collide with mine, and I can see he feels the same. It’s been a year. He still feels it. I still feel it.
“Jokes usually are funny,” I retort, trying to move away from him in an attempt to regain control of my body.
His mouth crashes into mine, his lips molding to mine. One of his hands cups the side of my head, the other resting on my waist. I grab his shirt when he nips my bottom lip. My mouth opens, and his tongue meets mine, stroking it in a gentle caress. Our bodies push together, and I drink him in, kissing him greedily.
Now, I remember. I remember why I can’t fight it. Why I’m powerless. Why, at nineteen, he is all there is.
I open my eyes as our mouths part. His lips are hovering over mine, close enough they could touch mine again, but they don’t. In the small gap between us all,I feel is the chilling night air where, just seconds ago, there was nothing but heat.
“Am I funny now, Kia?” he breathes, still holding my face.
“Yep,” I whisper, my voice slightly shaky. “You’re fucking hilarious.”
Reese’s hand leaves my waist and tugs the door open. “Then you better get in the truck so you can find out exactly how not funny I am.”
“I’m not...”
“Get in,” he growls, his eyes promising me a fight.
“No,” I say, pushing him back. I shake my head. “No.”
“What?”
I walk around him and away from him, walking backward. I shake my head, everything warring inside me. “I… No, Reese. I can’t.”
“Kia?” he calls.
“That…” I take a deep breath and stop at my car. “That shouldn’t have happened.” 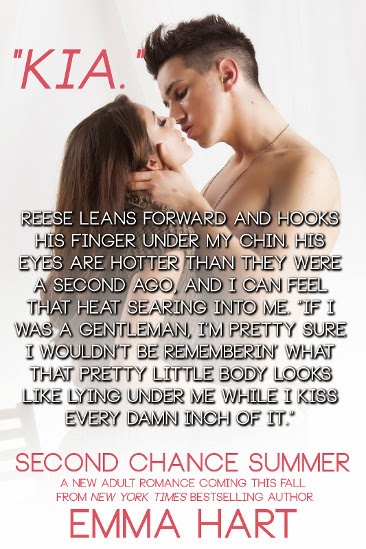 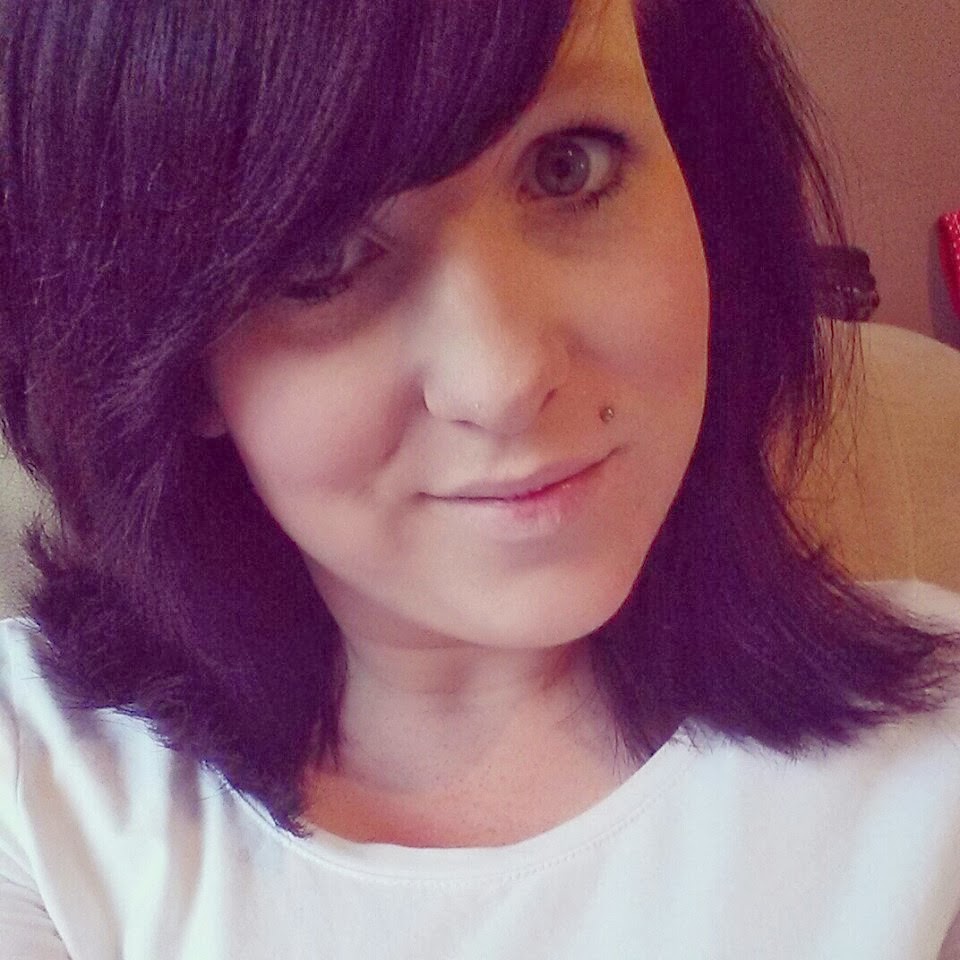 By day, New York Times and USA Today bestselling New Adult author Emma Hart dons a cape and calls herself Super Mum to two beautiful little monsters. By night, she drops the cape, pours a glass of whatever she fancies – usually wine – and writes books.
Emma is working on Top Secret projects she will share with her followers and fans at every available opportunity. Naturally, all Top Secret projects involve a dashingly hot guy who likes to forget to wear a shirt, a sprinkling (or several) of hold-onto-your-panties hot scenes, and a whole lotta love.
She likes to be busy - unless busy involves doing the dishes, but that seems to be when all the ideas come to life.
Find Emma online at:
Blog: http://www.emmahartbooks.com/
Facebook: www.facebook.com/EmmaHartBooks
Twitter: @EmmaHartAuthor
Goodreads: http://www.goodreads.com/author/show/6451162.Emma_Hart
﻿ 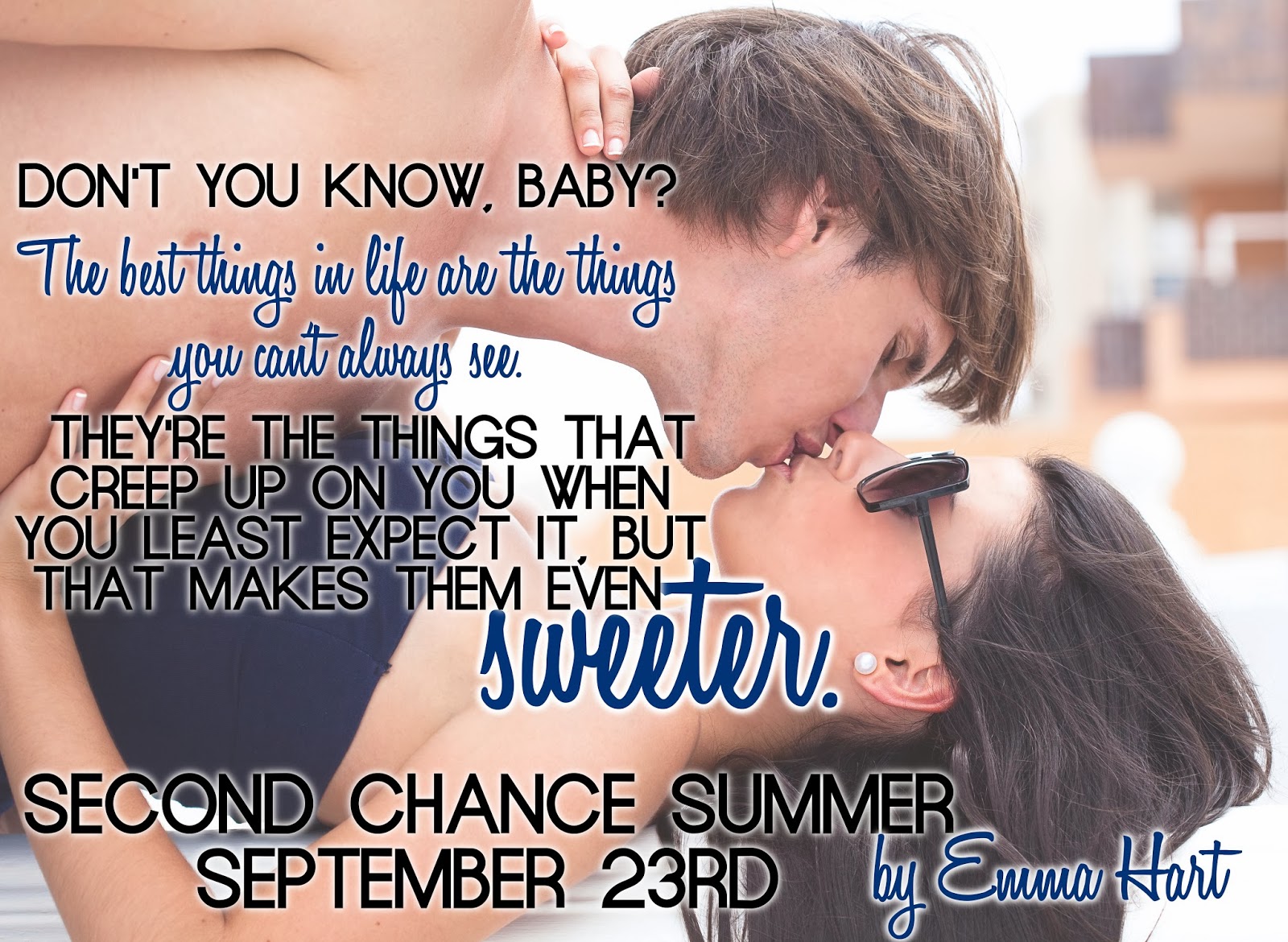 ONE OF TWO SIGNED COPIES OF SECOND CHANCE SUMMER:

Have you ever wondered what it would be like to have a second chance at love? No more regrets of the past but just being able to be with that one person again?? Sit back and experience that with Kia and Reese in Second Chance Summer!

I fell in love with Reese. I thought he was so open and honest with his emotions that it blew me away. He knew exactly what he wanted and although he didn’t go right after it when it (she) left he gets a second chance. He knows that anger will only push her further away so he takes a different approach and shows her how they are meant to be together. The words that he spoke melted my heart and I wish that a guy would say those things to me.

One of my favorite quotes:

“Tonight isn’t about any of that- it’s about me holding you so tightly you’ll wake up tomorrow morning believing I’m never gonna let go.”

Kia has issues with her parents and their separation. Her mom’s an alcoholic that can’t get over the fact her husband left in the middle of the night. Unfortunately there are tangles of lies weaved into the mix that will be brought out that could have changed circumstances in the past. Had Kia known the true reason behind her father leaving maybe, just maybe, she wouldn’t be so hesitant with Reese. I did become frustrated with her at times because they are meant to be together but she keeps him at an arm’s length to help protect her. Her fear is becoming just like her mom.

I’m a little torn with the ending…. Of course there is another novel coming but it leaves it wide open knowing they want to be together but will it happen soon? Who knows what the future will hold for both Kia and Reese but with a love as powerful as theirs I hope that they end up finding their happily ever after together.
Posted by Unknown at 9:41 AM